Updates to Carolyn & Don's profile since your last visit are highlighted in yellow. 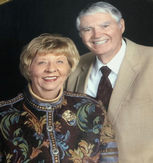 First off, thanks to Facebook for giving me this platform to do this in front of hundreds of people lol, maybe I shouldn’t subject everyone I know to this post. But whatever, I just wanted to take a second and write a post to a man that made a huge impact in my life. Father of 5 and husband of 50+ years to Carolyn R. Benton. I knew him as a Christian with unwavering faith, an entrepreneur, a boxer (of oranges - not really but that was a favorite joke of his), risk-taking, nacho-joke tellin, paintin’, old-school-car lovin’ grandpa.

While he will be missed, sadness is not necessary, as he lived a great, great life. His celebrity comparison in terms of the life he lived would have to be Forest Gump. Born 2/10/1930 in Tulsa, OK he grew up as a son to a painter during the dust bowl. He’d go on to run track and high jump in high school, drafted in the Korean War, started several business and had a very successful career.

I will always regret not taking notes of every single one of his stories, my memories fuzzy on some specific details but here are a few of my favorites:

- Drafted into the military for the Korean War he had to get from Kansas to Washington. Something happened, like either, he hitchhiked there or took a long time for a reason, either way, it took him a long time to get there. Not on purpose, like missed some flights and busses kind of stuff. Edit: I think I remember it now: he was supposed to go on a plane that was going from Kansas to Korea to move supplies. When they crossed a certain point in Washington, they would parachute out of the plane and go to the base from there. He said, no thanks, I'll find my own way there. Either way, he gets to the military base and some officer says to him “see that boat way out there? That’s the one you’re supposed to be on.” So he spends a few months in a military jail for not reporting until he was shipped out. If you look at the map I posted, if he were to have been on the original ship, he would’ve been going in on the picture to the left. The US and SK were backed into a small area around Pusan, but while he was in a military jail in Washington, the US and SK had pushed NK much further north. He was stationed in Pusan for the rest of the war. Grandpa had luck on speed dial, but you create your own luck sometimes, too.

-His job in the military included being second in line to drive an amphibious vehicle that transported troops. One day, his commanding officer asked Don to paint it. Grandpa loved hot rods, so what did he do, painted it bright red 🤦😂😂

-When he was 16, he ran away from home, was hitch-hiking west and was down to a nickel. He goes into a restaurant to get some food with that last 5 cents, the waitress saw how hungry he was and realized that he was hitchhiking and broke and gave him a job washing dishes.

Diagnosed with Alzheimer’s at age ~70 he was joyous and a pleasure to be around all the way until the end at age 89. He never gave up trying to be his best self until the end. For instance, in the picture of him and me where he has the red flannel on, his belt was on wrong, the belt buckle was off to the side. He understandably didn’t want someone messing with his belt so we took a picture, then later he looks down and slowlllyyy starts fixing his belt. Of course, we had to do a pic do-over.

Much appreciation goes to my Grandma who had to gradually help Don more and more as the Alzheimer’s progressed. When Grandpa was finally put in assisted care, she saw him almost daily, even when that meant sometimes having to take a shuttle to the vets home in Mt. Vernon. It would have been very easy for her to move Grandpa to a nursing home much sooner and not visit him like she did. Some real end-of-the-Notebook stuff there.

Grandpa, thanks for being such a great influence and congrats on having lived life to its fullest. Sean.

To grandpa from firstborn granddaughter, Lindsey. Sent from my iPhone

Yesterday my grandpa Don passed away. I have had so many memories with him that I will never forget. He loved to dance, tell stories and play a mean game of ping pong. He fought in the Korean war and married my wonderful grandmother and they had 5 wonderful kids he will be able to be 3 of his kids and I got a new angel that will look over me and all the family. Some of the best memories I had with my grandpa I will never forget. Below is one of my favorite pics this was the last day we had a dance and the conversation we had as well summer 2016. He is in no more pain and in a better place. Love you always grandpa - love Lindsey poo.